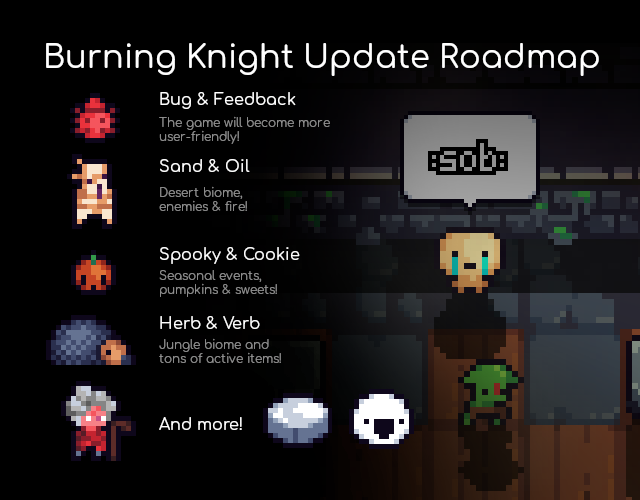 Remember that post from December 2018, where I talked about development plans for Burning Knight? Well, I was right about one thing for sure: the development did not go according to the plan… So let’s talk about this.

END_OF_DOCUMENT_TOKEN_TO_BE_REPLACED

So I’ve been randomly making tweetcarts for the past 2 years, and I’ve been always obsessed with how much cool stuff people can fit into a single tweet! I see a lot of guys out there who try to start with tweetcarts but struggle with fitting their doodles into such a tiny size margin.

So here is a guide on how to do it, and a few tricks that I use myself.

In case you didn’t see this magic yet: tweet carts are PICO-8 doodles, that fit into a single tweet. That means that each of those masterpieces is not longer than 280 chars (bytes).

Tweetjam first started in 2016 on the PICO-8 forums, but quickly moved over to tweetjam hashtag on twitter.

If you’ve stuck with twitter for long enough, you remember, that tweet limitation on twitter was not always 280 chars. It all started out with just 140! So if you check out the early tweetcarts, they all are just a half of the modern ones, compared by the size!

END_OF_DOCUMENT_TOKEN_TO_BE_REPLACED

My experience with Dear ImGui and thoughts about boring UI

ImGui is yet another a small C++ UI library.
What makes it different from most other UI libraries, tho, is the way you define
widgets with it. Let’s take a look at a basic example: I want a button, that logs something
to console when pressed.

END_OF_DOCUMENT_TOKEN_TO_BE_REPLACED

Also, hey, I wasn’t sitting without a task for the last month, so here is a short list of things I’ve done, that are somewhat exciting:

Trust me, there are so many not exciting things, that I had to cut from this list, just because… Well, they or wherein java edition, or just too boring.

So let’s dive into it, and have a closer look at all that cool stuff!

END_OF_DOCUMENT_TOKEN_TO_BE_REPLACED

Porting 60k line Java code base to C#, or a story about mistakes of the past

Somewhere in the drafts of this blog, I have an article, that explains all the flaws of Java 8 (and a bunch of other languages). It probably will never be released, cause it’s just a pile of boring (and sad) facts, but I will list some of them, to explain my actions, that I did.
So, Java:

Might be enough already, but there is also the framework, that BurningKnight Java Edition works on – LibGDX. Overall, it’s a great library, but:

So yeah. It’s all was piling on me for over a year now, and I’ve been dreaming of porting the whole game to C# for a while now. Burning Knight git repo has csharp branch, that is 7 months, but it didn’t really go far beyond rendering an animation of a mummy.
I’ve knew it was a huge project to port, and I was scared of it.

END_OF_DOCUMENT_TOKEN_TO_BE_REPLACED

So around a month ago, I told you all, that January would be the month of bugfixes and forest area. Well, something went really differently… Here is what I’ve got done this month.

That’s something, that I totally forgot to mention, but the game main focus is on the Burning Knight. And BK battle was pretty boring before, and he had the same attacks for all depths, but that’s not true now. I’m currently in progress of creating 16 attack sets, that BK will choose from to make the game more dynamic and interesting.

END_OF_DOCUMENT_TOKEN_TO_BE_REPLACED

My thoughts on language design

This topic might seem really unrelated to gamedev or me. But I’d argue, that programming is one of the core components of huge thing, called game development. And I’ve been playing around with making programming languages for quite a while now, so I have a few things to say in this field.

We have a lot of amazing languages today, why imagine another one? Well, to start off, it’s a great exercise. Not to note that it also a really good topic for discussion, and I’ve been collecting my ideas for ages now.

I really like C-family programming languages. Especially I like C#, Java, and JavaScript. C# is one of the most modern languages out there, yet I still see a bunch of space for improvement.

END_OF_DOCUMENT_TOKEN_TO_BE_REPLACED

So one day, I decided to open the source of all my PICO-8 carts. I threw away a lot of not finished carts, yet I still ended up with a big number of them. And I not only wanted to make the carts downloadable but also to make them previewable in the browser. The typical way to do that with PICO-8 is the following:

Then zip index.html and index.js, etc etc. But you know, even doing that with 20 carts will take quite some time.

And I knew BBS has a way to run carts without exporting them. So after a small research, I found a small library on Github, that allowed me to do just that, yet it was outdated for 3 years.

The perspective of just throwing a cart into the directory near your script to automatically make it playable was too good.

END_OF_DOCUMENT_TOKEN_TO_BE_REPLACED

Game jams are truly amazing. They force you to focus on making a game quick, focus on game core, and not polish. If you did not participate in one yet: what are you waiting for?

I’ve learned about game jams in the winter of 2016. It happened so to be that Ludum Dare 37 was around the corner. At that point, I finished just 1 small SDL2 game. And my mind was full with text roguelikes and Terraria, so I went with the toolset I was familiar with: Java and super slow library, that provided a simple way to render a text grid.