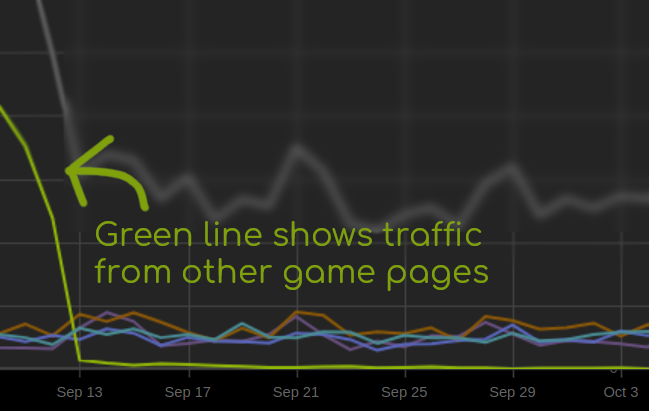 Hi. I’m a fellow indie developer, who tries to put a word about his game out into the world. And before this September, Steam was by far the most influential platform for me. It allowed me to show my game to thousands of players…

But now it’s over. Steam killed my traffic.

Around that time, Valve changed Steam promotion algorithms once again. Some games saw a "random" spike in views. But most of the indie games took a huge hit in the traffic. And to understand, what happened a bit more, I need to explain, where most traffic came from before.

You see, steam has this small little section under each game page, right before the reviews. And you’d think, that this is a nice way to promote other games, but it doesn’t really do anything. WRONG! This was the ultimate traffic giver for a lot of games. For example, almost 90% of traffic on my Steam page came from this section. I have to say, all my other attempts to spread the word about the game did not come anywhere close to this. Twitter had almost no impact.

To get your game to show up on other game’s pages, you needed to have some matching tags, and it was a "try and see how it goes" method, but if you were patient enough, you could get some great results.

And then, Valve made a tweak to the algorithms, that decide, what games show up on the "more like this" section. It started promoting big AAA titles and the games, that already released. That sounds great on the surface, but for us, indies, this is the steam apocalypse…

I’m not blaming Valve here. I’m thankful for the opportunity, that I had. And they don’t owe me anything… It’s just… I have no idea, what to do now. It’s been over a month from the traffic drop. Valve says "it’s a bug, we are debugging it". But I did not hear anyone else talking too much about this, except for some folks on twitter… And I think, we need to bring this issue up!

Are you a developer? Are you affected by this too? Please, tell me about it, let’s not be quiet!
Egor.