So a few months ago, I got invited to a game conference in Moscow, called White Nights. I’ve never been to a gamecon before, so I got really excited and started preparing my game, Burning Knight, for the showcase section. At first, 1.5 months looked like a huge time frame to get the game ready, but it flew by so fast…

When I develop games, I tend to focus on the gameplay aspect more, than on menus and other UI. I knew BK interface was pretty rough, so it was of the biggest things I had to focus on.

The game also had almost no SFX, and since I don’t have a sound designer, I’ve bought Zoom h1n recorder, and spend a few days just running around my house and pocking everything, that I saw. It was a lot of fun, but editing the recordings, adjusting them and picking the right ones takes a lot of time, so I simply picked the most important ones and left the rest of the work for later.

I’m not sure, how I’ve managed to ignore CI’s for so long. A few months ago, Github rolled out their new CI: Actions, and I’ve signed up for the beta… and did nothing. Until a friend of mine saw me building the game by hand, and helped me to setup Github to build the game for me. It wasn’t easy, debugging Windows scripts on a virtual VM, that gets reset every time, is not easy, especially if you are a Linux user… But I’ve managed to get it done.

I can’t imagine making games without CI anymore. Being able just to merge your commits into the release branch and then press a single button in Steam to publish a new game update… It’s a feeling, that I can’t describe. I really recommend you taking at least a glance at the world of CI.

After I rewrote the game in C#, I didn’t do any playtests what so ever, because I never felt, that the build "was ready enough". But I have to say, having a deadline helped me a lot, but I only managed to finish a playable build 3 days before I had to go. I wish I started collecting feedback on the build earlier…

So anyway, first playtesting round went really well, but it was just my friends playing the game, and not real players testing it. They liked the game a lot, found a few minor bugs, but that’s about it. So I’ve quickly patched the bugs, and the fun of real playtesting begun on the next day…

I’ve dropped the build at my Discord server. It isn’t big, even tho, it’s more than 1.5 years old at this point, but it was just enough, to totally destroy the game. Every tiny glitch, that I thought no one would notice, was reported. So many exploits were found. And they also went data mining into the game assets folder… But it was a lot of fun, both for them and for me. And I also had a huge list of things to fix and change, and I had just 1 day left to do it.

Late in the evening, I was coding something, and then I’ve noticed, that my laptop’s power supply died. Just a few hours before my train to Moscow. And that was the only laptop I had. And I still had to go and pick up the posters and business cards I’ve ordered. All shops, that I found online, closed by that point, and I had no replacement. Thankfully, I found a matching power supply in my house, that had a slightly different plug. So I combined both wires with some soldering, and it started working again. 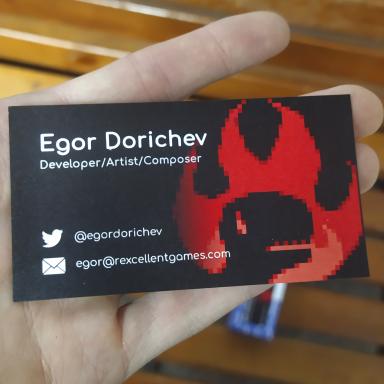 I had just enough time to pick up my business cards and leave.

As I’ve said, it was my first ever gamecon, so I was excited, when I saw all the game booths and the huge hall, that it was all inside. I have to admit, sitting in one spot for 2 days is pretty boring, so I’ve spent most of my time away from my stand.

The conference was mostly about mobile games and all the business around them, but there were plenty of PC games too.

Sadly, not so many gamers were around. And overall, I got max 20 people to play the game in 2 days, and that was pretty disappointing. But. Big but here. Almost everyone, who came and played the game, stayed around for a few hours, and I’ve gathered yet another huge list of bugs, changes and ideas. The game proved to be a bit hard for the most players, but taking that it was a mostly mobile conference, I did not worry about that too much.

My favorite thing to do was to pretend I’m not the developer, by standing somewhere nearby, wait till someone came to play, and then watch the reaction 😀

The feedback received doing the conference motivated me to do a lot more playtesting, and with the new CI system, it’s so easy, since I use git anyway. So if you, by any chance, want to help me with testing the game, hop onto my Discord server 🙂

Since the conference, I’ve showcased the game in a bunch of other smaller events, and this cycle of constantly fixing/adding stuff and then seeing, how the feedback changes feels really good. And it’s great for the game.

Start to playtest your game as soon as you can. It really helps.
Egor.