Quite a lengthy title, but it kinda matches the time gap between now and the last non-year-recap post, huh? It’s been 2 years? My gosh. Let’s quickly talk a bit about what’s been happening. 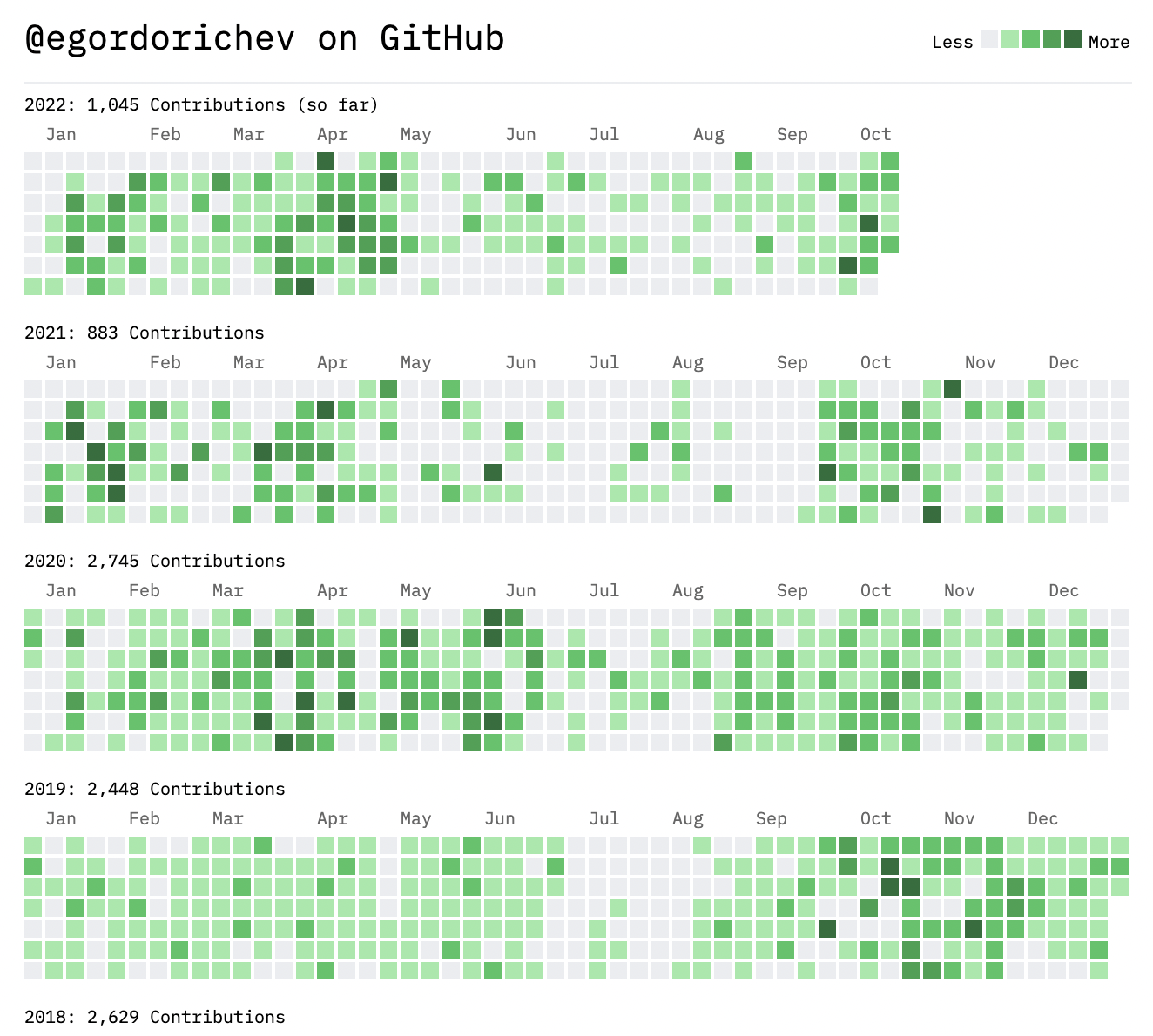 As you can see, I wasn’t exactly doing nothing, even tho my coding has slowed down quite a bit…

I have to admit, I had to resort to my git history to even begin to understand, what I’ve been wasting my time on.

This little side project took over 2 years to complete. Initially started by @MatheusMortatti in C#, I tried to throw it into Burning Knight, but it turned out to be waay to slow. So I did the only thing you could imagine me doing, and rewrote it in C++. The goal of the project was a complete emulation of the PICO-8 fantasy console, that I grew up with and that I love to death. I either didn’t find other emulators, that fully emulator memory & other stuff I needed, or chose to ignore them (very foolish), and after a bunch breaks on it, finally managed to push it together with my teammate to be released on Steam in April of 2022 with a smol collection of classic PICO-8 carts.

The hope with it was to be able to run PICO-8 games on platforms like Nintendo Switch & co, but I never got any publisher interested enough in helping me with releasing it there. Plus it is still not very good in terms of stability & it doesn’t like some carts. And in the 2 years of development, zep kept releasing PICO-8 updates… Don’t get me wrong, love me some PICO-8 updates, but not when you have to go and implement them from 0…

Yet another project, that I’m really ashamed of… It’s a really bad Ludum Dare game, written in JavaScript. The basic idea was to create some sort of dark world, where the player is battling against the darkness for the last few remaining pieces of the ground, that he has. I like how it look (art isn’t made by me), but that’s about it.

The audio was made by my friend Mathew, and the art and part of the gamedesign was "done" by a few noobs we got forced into our team.

This is probably the first time ever, where I felt like I didn’t get enough time to finish everything I wanted. Oh well.

While preparing for LDJAM 51 (spoilers, I gave up in the first few hours), I rewrote the engine I used for this game, and it’s still sitting on github, waiting for it’s glory day…

For as long as this blog has existed, I wanted to tell you about my pet programming language, lit. I’ve been working on it for over 5 years, or to be exact, on different versions of it. It all started, when I found this amazing book. It wasn’t even finished at that time, but that didn’t stop me.

Lit has gone through a lot of design iterations. It looks like a mix of Lua and JavaScript. It used to have static typing, but now it’s dynamically-typed. Every ludum dare, I hoped that I could do the next one in lit. But every time I tried to write anything in lit, I would ran into stability issues, or something I did not implement yet. And honestly, I’m ready to bury this project, and never dig it up again. It has been a great learning experience, but I don’t think it will be ever usable as a scripting language.

I have so many frustrations with debugging memory issues in C…
Everything could be fine, but then you add another line to your lit file code, and your code starts crashing. Hours of debugging later, and turns out, that you forgot a * near LitFunction, so the memcpy() copied a lot more data, than it needed to, and overwrote something in the process. Ugh..

I even started an engine for lit.

After finishing Burning Knight, I’ve joined two projects, where I’m mostly the solo programmer. VoxQube started as a C# project, then I rewrote it in C++, but now it’s a JavaScript app.

I’ve learned React & React Native for these projects, and greatly improved my JavaScript skills. Looking back at my code, I laugh at how bad I was.

This is the project, that I’m the most proud of in the past 2 years, even tho it took around a week to write. I’m going to write a standalone article about the thought process behind it and it’s design, but if in short, it’s a programming language, that has functions as the only variable type.

Coding has taken a backseat

But yeah, if you’ve been counting, that’s been almost nothing in terms of coding. Real life has been taking more and more time, I had some major health issues, we also had covid and now this whole war situation…

I did a bunch of travelling for a few months at the end of this spring, bringing up my total airplane flight count to 50 in the 20 years that I’ve been alive, 16 flights in the past 6 months.

I’m also studying music more, learning to play the bass guitar, got myself a pocket operator and really enjoying it.

Started playing a lot more games, finding my new all-time favorites, like Subnautica. I’m slowly returning to more coding, I want to get back to gamedev.. But until I have an idea, that starts burning inside of me, like a bonfire, I’m not going anywhere.

Until then, take care.
Egor