Burning Knight is out!

Hey!
It has been a while, huh?

Umm, did I say something about writing more in the new year resolution? Wel… I think we both see how this turned out, oops. But yes, I’ve been extremely busy with Burning Knight, my indie game (that is out now, please buy a copy!)

So, I usually don’t go into many details on the development on social media, especially recently, but this is what this blog is for, even if no one is reading, this is like a time capsule to my future self. But if you are reading this, well, I’m glad I’m not shouting into the void.

As of writing this on June the 5th 2020, I can not recall any major development breakthroughs that happened in January…

Looking at the commit logs (a huge bonus of using git), I see that I’ve pretty much worked only for 1 week, the rest of the month I’ve been suffering from a really bad burn out. It’s extremely weird to me because usually, January is my most productive month. I’ve been slowly working on new NPCs, achievement systems, and adding new Grandma/DM items.

But the development in this year really took off in the middle of February. I’ve finally recovered from the burnout and felt a tiny drop of motivation. I’ve fully implemented the Frozen Ruins area, which has a really fancy mechanic of breaking snow walls.

In March I’ve started trying to wrap up my feature list. Of course, looking back at it now, I probably should’ve done that much more aggressively, but well, that already happened. I’ve implemented leaderboards, overhauled the death screen, added run statistics, daily runs. I had a lot of fun implementing these, especially leaderboards for some reason. The game didn’t have a scoring system before, so I had to invent a way to score player actions, and surprisingly, that was the hardest part. Steam API worked buttery smooth, and I’m so glad I’ve implemented those leaderboards, it’s really fun to watch them evolve. 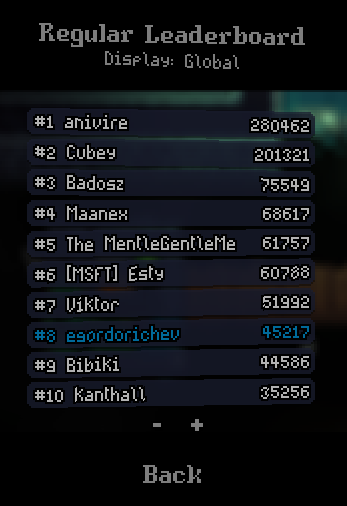 Right now I’m on a pathetic 8th place, but I promise, that I will fix that!
I’ve also reworked the hub (yet again), and added a really nice display for your top 3 runs.

While working on the hub, COVID popped up, and it’s still raging in Russia as of writing this.

In April I’ve added a ton of achievements, new items, and started working on the translations. 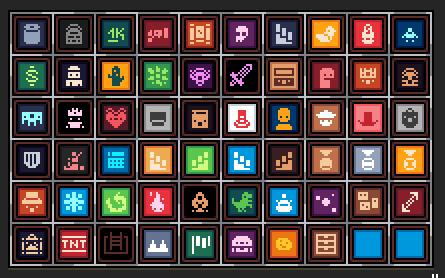 I’m skipping over a ton of stuff, but most of it is pretty boring and unremarkable, half of my commit logs for this project are bugfixes… Yes, I was aware that bugs would pop up, but not this many…
It’s just hard for me to even describe it. Basically, after every single playtest, showcase, or whatever I always ended up with a huge huge list of little tweaks, fixes, and such. Probably no one notices most of these, but that’s where most of my time went.

And finally, we get to May (+ a few days of super intense June).

I always hated implementing bosses. It’s such a hard thing to get right, and I never liked bosses in games anyway, but there are things that you just gotta do. I’ve been postponing the two final bosses of the game for a few months, but I’ve finally found the forces and finished them. And the game became done, all of a sudden?

Or so I thought. At this point, I’ve sent the game build to be reviewed by Valve and started polishing up some sharp corners here and there. 6 really scary days later, I’ve received a GO for launch from the Steam team. Or so I thought. We’ve decided to release on June the 5th, that gave me 11 days worth of marketing/development margin, but woah this time went by so fast! It’s probably been the most intense 11 days of the whole development, I’ve even implemented a twitch integration in that time (:

So here I am, sitting with my laptop, typing this blog post. Just 1 hour before I press that green button and the game either goes crazy or flops. For the past week, I’ve been both insanely stressed out and calm, I guess I’m just so tired that I can’t really stress. But as the timer ticks closer and closer, I’m getting really nervous and excited.

But we will see how it goes really soon. I did my best. Looking back at the development, it’s been a really hard journey, yet I’ve still learned so much. It’s crazy for me to think right now, that before starting the project I had no clue about how shaders work or how to draw nicely. So, I have really mixed feelings about the project. I’m really glad to finally wrap it up, even tho I really suspect, that I won’t be able to relax at least for another month, bugs will hunt me.

But till then, stay calm, get a copy of the game, and I will see ya later!